Update 2018/06: added GEXF export for exploring the graph with other tools, added Side-by-Side reading of the text and graph

Few days ago Joe Daver of the Lone Wolf fame passed away, what a pity, it was an enjoyable type of book when I was a child. Since several years Project Aon is freely publishing his works in a browsable way.

Project Aon provides a graph representation of the books (e.g. here) but I wanted to have my twist as remembrance.

I have prepared a browsable story graph of the first 7 books, highlighting deaths, combats, quiz nodes, looping edges and death probability. In particular I have create also one single view with all these 7 books that gives an impression of the flow at glance.

Click on the nodes to get to the page.
Nodes:

In side-by-side it is possible to sync the book view with the graph and vice-versa. It works only on Chrome.

Graph computing can be used for some statistics:

Note that the shortest is path is purely topological and there is no verification that is had conflicting dependencies (e.g. disciplines) or it has major side effects (e.g. loss and not recovery of the inventory).

Random based edges have been excluded from shortest path computation. If there is no possibility of shortest path we have highlighted with a negative sign. 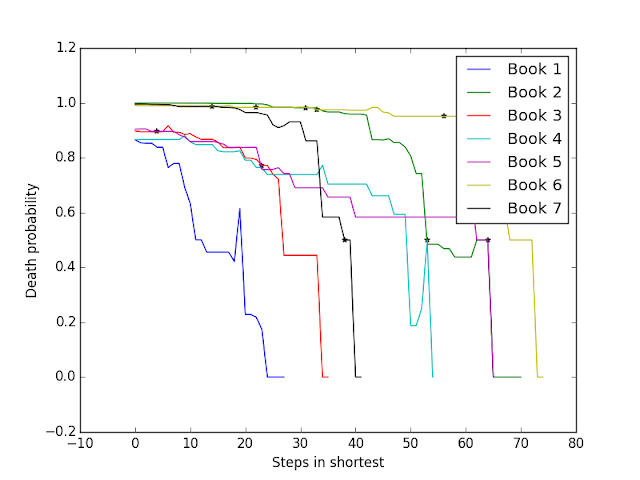 Some notes about structure as it emerges from graph and from memories of reading:

The code for extraction and generation is on github. It's based on Python with graphviz and networkx. You are welcome to reuse it.

The concept is that we first extract graph structure and semantics from the HTML files, then apply graph processing techniques and then generate the visualizations.

Ideas for improvement on visualization:

While this is just for fun, I worked on graph analysis applied to Technology Trajectories based on citations among patents.