Greetings from Santa Claus ... a little exercise in Three.js (WebGL) based on a LOGO-like custom syntax. Although this could appear as a voxel designed object it is actually generated via a command sequence parsed using Regular Expressions. For example the head is:

The drawing syntax is based on boxes with height 1 size specified by S command, color by C command, write by the dot "." and a bunch of moving terms. Finally hierarchy is provided via anchors A#, while some spatial memory stores are based on the P(ush) and p(op) commands.

The outline effect is based on the interesting postprocessing pipeline from Three.js examples. 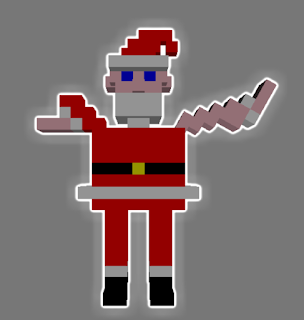 Research wise LOGO in 3D can be found in some examples:

Docker for our ROS robotic overlords